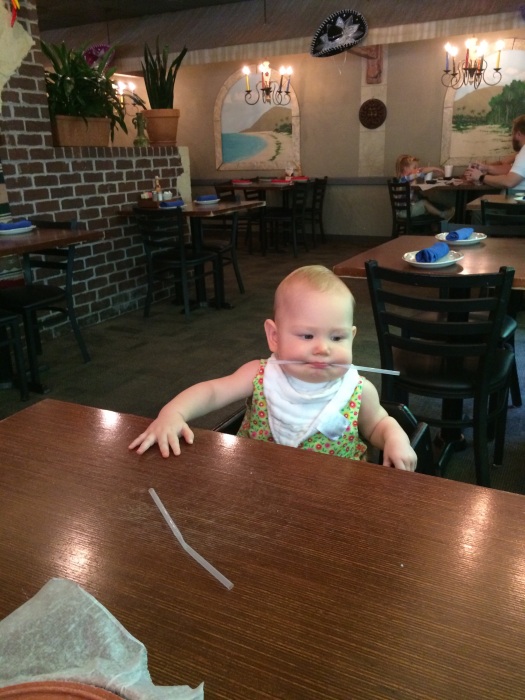 I moved to Texas when I was 25 years old. It didn’t take long for me to develop a taste for Tex Mex. If you’re from Texas you crave Tex Mex. If you’re from Texas and you find yourself living in Oklahoma, you still crave Tex Mex because the restaurants in this state don’t make or serve Tex Mex. We have Okie Mex. Some restaurants do Okie Mex better than others. One of those places is Ted’s. The original Ted’s location near NW 63 and May Avenue in OKC opened in 1991. There are multiple locations in the OKC metro and the closest to us is 0.5 miles from the house. For the final installment of our Tiny Taste Tester series from this weekend we present:

Smashed Mexican Spiced Potatoes. Green chilies provide the predominant flavor profile. OK but not her favorite. She made a face. Two stars.

Guacomole. It’s green but doesn’t taste like any other green mush that comes in small jars. I don’t know what this is but I like it and I like it a lot! Five stars.

There is no country in the world where confirmed coronavirus cases are growing as rapidly as they are in Arizona, Florida or South Carolina. The Sun Belt has become the global virus capital. This chart ranks the countries with the most confirmed new cases over the past week, adjusted for population size, and treats each […]

Mall and Hotel Loans Are Blowing up Commercial Mortgage-Backed Securities

Mall and Hotel Loans Are Blowing up Commercial Mortgage-Backed Securities

My honeymoon with Thailand ended yesterday. We live in a condo in Chiang Mai, Thailand. Signs on every door warn: No Mask, No Entry. Most people comply. Some don’t. I ignore them unless they try to join me in the elevator. If they do, I wave them away. “Not without a mask, please.” … Unlike […]

Musings of an elderly medicine reg

The Wild Heart of Life

"He was unheeded, happy, and near to the wild heart of life." ...James Joyce

To see a World in a Grain of Sand, And a Heaven in a Wild Flower , Hold Infinity in the palm of your hand, And Eternity in an hour. ~William Blake

historiography for the masses

Thoughts on life... by Donald B. Wilson

JHND- an international journal publishing in the field of nutrition and dietetics. JHND is the official journal of the British Dietetic Association. All views expressed on these pages are solely those of the author.

Engineer by day; Frogger by night!

Educating Iowans on the breadth and global significance of agriculture.